How to Use Your Webcam for Better Prospecting

Your webcam should not just be for work calls! Your webcam is, in fact, one of your most important sales prospecting tools when used the right way.

If you’re still working from home, it’s likely that you’re using your webcam on a daily basis. If you’re not also using your webcam to create video content, then you are missing out on the potential to enhance your sales process. Video is great for various reasons. Not only is it more interesting than reading just a plain block of text, but it is also more engaging, human, and a whole lot more memorable.

Prospects are flooded with traditional sales emails, so how often do you think they get a personalised video message from a sales rep? Not often … if ever. For a response every sales rep looks for, you need to stand out from every other salesperson who’s trying to connect with them. So how do you go about doing this?

Tips to get started


Obviously, to record some video content you need to have the right kit. As well as making sure your laptop or desktop has a working camera and microphone, consider using some free video editing and screen recording software to make sure your videos look as professional as possible.

Make sure the room you pick to shoot in has good lighting and is in a state you think your prospect would want to see it in. Try not to veer your prospect’s attention from the message you want to convey with the empty bottles of WKD from your wild six person or less gathering you had the night before.

This goes without saying, but try to prepare a script for your prospecting. In order to convey that human connection, try not to just repeat what you would say in your emails. Customise these scripts to the prospect you are reaching out to, but make sure you practice your script over and over to the point it sounds like a natural conversation and not amateur hour at the comedy club.

4. Keep it nice and concise

How long would it take for you to lose interest in a video sent to you? In reality, no one wants to sit through a 5 minute video just the same as no one wants to read through five chunky paragraphs in an email. Try to aim for around 30 seconds or less and three minutes or less for product related ones.

5. Get personal with props

Some of the most memorable videos use props that are highly relevant to your prospect. Write your prospect’s name on a small whiteboard to show them that you made the effort to create a custom video. Just make sure you’re holding the whiteboard in the thumbnail so that they can immediately see the video is tailored directly to them.

Although the most popular method of prospecting is via email, you’ll find that the vast majority of your prospects are all over social media too.

LinkedIn’s messaging features allow you to attach video files to send directly to your prospect. Better yet, upload your video to either Vidyard or Youtube and send them a link to reduce the friction of having to download.

More and more people are using Facebook for professional use. If you’re friends with your prospects, Facebook allows you to upload videos to Messenger. Better yet, you can record them within the app itself. Since Facebook still feels fairly informal, it’s a good place to send funny, casual messages.

Twitter lets you import a video you’ve already created or record one in the app. Try using videos to reach out to prospects who have followed you on Twitter but haven’t responded to your emails or calls. Sometimes all it takes is a new approach to break through and get a response.

Your webcam should not just be used for Zoom calls - Take advantage of the fact that you have a video producing weapon at your fingertips. Everyone knows that prospecting emails are boring, so make the effort to stand out. The response you will see will surprise you.

Still scratching your head as to how to prospect? Check out our complete guide to sales prospecting below.

Sam is the Client Success Manager at BBD Boom. She is also a content specialist and marketing strategist with over a decade of experience working in both agency and brand environments. 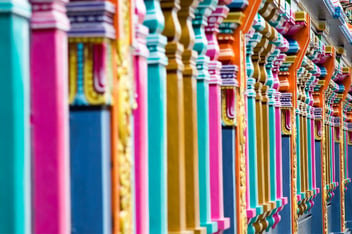 What Are Pillar Pages, and Why Should You Use Them?

Content marketing has changed a lot over the past few years and will forever evolve, making keeping...
LEARN MORE 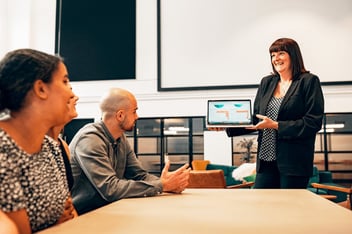 An effective website is key for any business. Often it’s the first thing your prospects see. But...
LEARN MORE 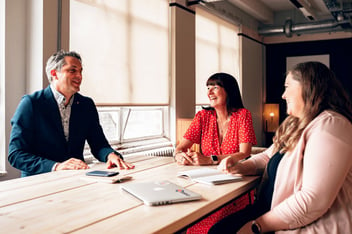 As one of the world’s leaders in real-time meeting technology, Lumi needed a website that would...
LEARN MORE